NEW YORK, NY – November 9, 2015 – The Digital Advertising Alliance (DAA) today launched “AppChoices en Español,” an updated version of its mobile app that provides access to the DAA’s transparency and choice mechanisms for Spanish speakers in the United States. “AppChoices en Español” allows users to control the collection and use of cross-app data for interest-based advertising on the device on which the app is installed.

“The United States is the second-largest Spanish-speaking country in the world, and we want to be sure that Spanish speakers have the same access to the DAA’s tools as English speakers,” said DAA Executive Director Lou Mastria. “AppChoices is the first cross-industry self-regulatory tool to address the twin issues of transparency and consumer control in mobile apps, and we are proud to build on that legacy of proactive privacy tools by providing the same level of transparency and consumer control in Spanish for U.S. audiences.”

“AppChoices en Español” provides an easy-to-use interface to allow users to set their preferences for data collection and use across apps for interest-based advertising and other applicable uses. Starting today, “AppChoices en Español” is available as a free download from the major online mobile app stores, including Google PlayTM, Apple App StoreSM, and Amazon Store.

Hispanic users are leading the adoption of mobile devices, according to a study from Specific Media and Starcom MediaVest Group, which showed that Hispanic Americans spent 42 percent of their total online time on a mobile device vs. just 33 percent for Non-Hispanic users. The same study showed that Hispanic Americans spend significantly more time online at 31 hours per week, compared to just 12 hours per week for non-Hispanic Americans. According the U.S. Census Bureau, there were 54 million U.S. residents of Hispanic origin in 2014, and 38.3 million people spoke Spanish at home in the U.S. in 2012, a 121-percent increase since 1990. 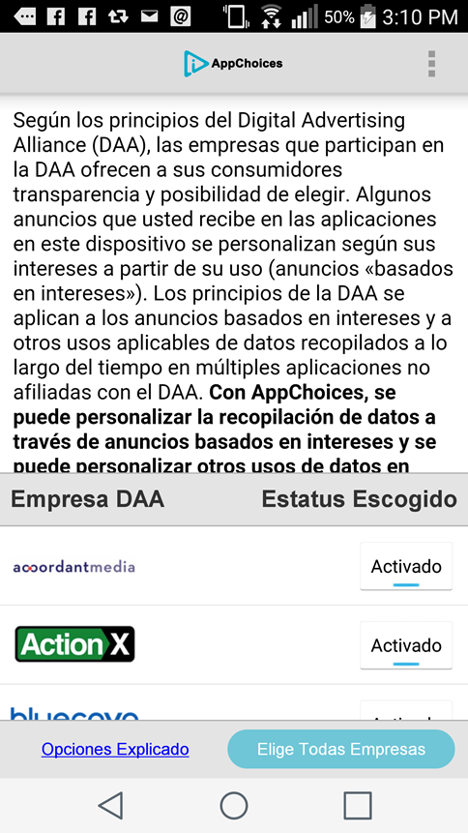