This blog is Part I of II. Part II discusses how some parts of the interest-based advertising ecosystem are preparing for GDPR adherence.  No information imparted in this blog series should be construed as legal counsel. Rather this post is strictly for information purposes only.

The EU’s General Data Protection Regulation (GDPR) comes into effect on May 25, 2018, leaving affected organizations less than a year to come up with compliance strategies for what will be a significant change in European data regulation.

Summit Snapshot: How Out of Home Advertising is Using Data Responsibly

As out of home (OOH) advertisers find new ways to embrace digital tech, they are increasingly relying on the bread and butter of digital advertising: data. And as leaders in out of home advertising look to a data-based future, they are also proactively dealing with questions around privacy -- a novel issue for what is perhaps the ad industry’s oldest medium. 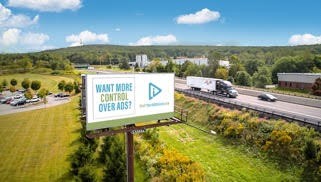 Photo:  Billboards… reimagined. A fun mockup from our friends at Outdoor Advertising Association of America

To characterize this evolution, innovators helping rejuvenate the industry spoke at DAA Summit 2017, shedding light on how out of home is increasingly resembling online and mobile interest-based advertising (IBA) in its application of data while planning for privacy.

The very notion of out of home ads using data may be counterintuitive -- billboards might be considered among the most static and nonspecific forms of broadcast advertising. Taking aim at such misconceptions, panel moderator, Stephen Freitas, chief marketing officer at the Outdoor Advertising Association of America (OAAA), began by asking panelists -- all of them practitioners in the field (no pun intended) -- the simple question, “...

In a panel titled “Brand Champions: Brand Safety and the Consumer Engagement Value Exchange,” attendees at this year’s Digital Advertising Alliance (DAA) Summit heard from leaders in digital governance, who spoke about how and why well-known brands are innovating to engage with consumers through choice and transparency made possible by DAA program participation.

“How has digital governance evolved over recent years? Has the DAA self-regulatory framework offered an effective, flexible way to meet consumer expectations while enabling innovation?” asked David Buzby, director of government relations at the Association of National Advertisers, who opened the afternoon panel and served as its moderator.

Jonny Silberman, director of digital strategy and innovation at Anheuser-Busch InBev, said ideal adtech and data partners demonstrate a “proactive approach” to privacy and that DAA compliance is “a prerequisite for us to play within the space from an innovation perspective.”

“One of the signals that we’re starting to look to in terms of identifying vendors is not only have they checked all their boxes from a privacy perspective,” Silberman explained, “but are they involved within the privacy community, are they engaged and are they having the conversations to push the industry forward? Those are the people we want to partner with in the long term.”

A day before this year’s Digital Advertising Alliance (DAA) Summit 2017, we held our inaugural “Digital Advertising Accountability Workshop,” which provided the latest insights in responsible data collection and transparency through a series of engaging presentations and panel discussions.  We were able to offer Continuing Legal Education credit in eligible states, an added benefit for attorneys that also heard practical compliance advice for their clients’ benefit. We thank our workshop partners at the Council of Better Business Bureaus (CBBB), Data & Marketing Association (DMA), IAB Tech Lab and Network Advertising Initiative -- as well as our counsel at Venable LLP -- for helping us pull this program together.

The following day, a panel of compliance practitioners -- Genie Barton, vice president and director of the Advertising Self-Regulatory Council (ASRC) Online Interest-Based Advertising Accountability Program and president of the Better Business Bureau Institute for Marketplace Trust; Xenia “Senny” Boone, senior vice president of corporate and social responsibility at the Data & Marketing Association; and DAA Counsel Michael Signorelli, partner with Venable LLP -- gathered on stage to summarize the workshop’s most important points for those attending the summit.

Here are the ten takeaways for staying on top of compliance with DAA Principles.

This is what Genie Barton calls the “...

“All of us love [...] the doors that are opening because of the digital world that we live...